Educe cafe: Bringing Out the Community through Art (at The University of Tokyo) 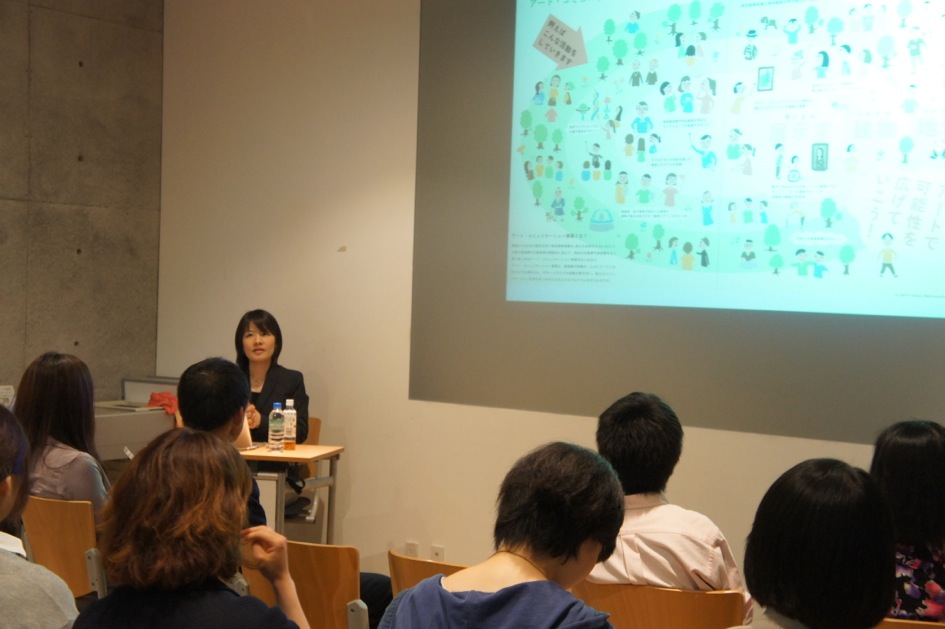 Curator Sawako Inaniwa (Chief for Education and Public Programs, Tokyo Metropolitan Art Museum) was invited as a guest speaker for “Educe Cafe” held at Fukutake Hall at The University of Tokyo to give a talk about “Bringing out the Community through Art.” Of course, I attended the event, along with Ms. Kondō (TOBI Gateway Project Coordinator), Ms. Ōtani (TOBI Gateway Project Assistant), and the TOBIRA candidates (hereinafter “TOBIKO”).

Being the fan that I am, I was deeply impressed with the beauty and spaciousness of The University of Tokyo campus.)

To break down the theme “Bringing out the Community through Art,” the following two questions arose: “What is the role of art in the formation of communities?” and “What kind of possible approaches could museums take to achieve them? “ These questions speak to challenges we face following the renewal of the Tokyo Metropolitan Art Museum (hereinafter “TOBI”).

First, Ms. Inaniwa analyzed the factors in creating a community in the Matsuba district of the Daito Ward where she resides: space, layers of time, the presence of introspective events and objects, places to practice, places of collective study, and sacred places. With this in mind, she explained the possibility of forming communities using museums as a social device when comparing the roles and functionality of both local museums and temples.

While using Ms. Inaniwa’s talk as a base, my impression is that, while temples and shrines are all part of our daily lives, they still can create an “extraordinary space” and be deep-rooted in people’s lives. Although I personally don’t have any specific religious beliefs, I feel like my body and soul are purified when walking through shrine or temple gates. In addition, temples and shrines are normally very quiet, but when there are festivals, tons of locals get together and even I have a great time. While Buddha and God have a special intangible existence to the locals, we incorporate them into our lives and live together in harmony.

I felt that having a fine line between an extraordinary and an ordinary space is quite important to creating a vivacious community.

These kinds of human interaction represent the ideal image of community-based museums that the TOBI aspires to be. For example: museums are also usually quiet (despite the fact that the TOBI is almost never quiet…); art exhibitions are in the back with a slightly higher threshold. Once you do go inside, there is a sense of tension to remain silent. However, when you have had a chance to unite with the locals, you can share the power of the museum with a variety of people. And I hope that TOBI can become the type of intimate museum where the locals can think “This is our museum.”

The main functions of a museum revolve around things like art collections, research, and holding exhibitions. Making these roles clear allows the museum to function as a social device where people become unified with the museum. However, for better or for worse, TOBI does not have its own art collection. (To be precise, they do actually have a small collection.) Exhibitions displayed at TOBI change on a regular basis depending on our projects. A wide variety of exhibits are held here, from large exhibitions like “Masterpieces from the Royal Picture Gallery Mauritshuis (Maurice House)” and “Earth, Sea, and Sky: Nature in Western Art; Masterpieces from the Metropolitan Museum of Art” to small amateur artists’ public exhibitions. Even though TOBI does not have a collection of art works, art becomes the conduit for connecting a variety of people, such as: people who come to see the exhibits, people who submit their pieces to public exhibitions, instructors and students from the Tokyo University of the Arts located right next to the museum, and people who are taking a walk in Ueno Park and then have lunch at the TOBI restaurant. TOBI should take this chance and use the “art communicators” (TOBIRAs) to make new connections with as many people as possible, and use the energy that museums have to become the “driving force” behind giving back to the community and society. I realized after the talk that, in order to achieve this, we need to let the TOBI Gateway Project grow in hopes that the TOBIKOs will nurture the feeling of the TOBI being their museum. In order to do this, after Ms. Inaniwa’s talk, I realized that we first need to help make the TOBIKOs feel like TOBI is their museum and ensure that the TOBI Gateway Project is a success.

After Ms. Inaniwa’s talk, it was a time to mingle. Food and drinks were provided, and people socialized with others. People who attended the talk were not only students from The University of Tokyo, but also included wide variety of people such as artists and people who work for companies and non-profit organizations, all of whom seemed to have a meaningful time here. 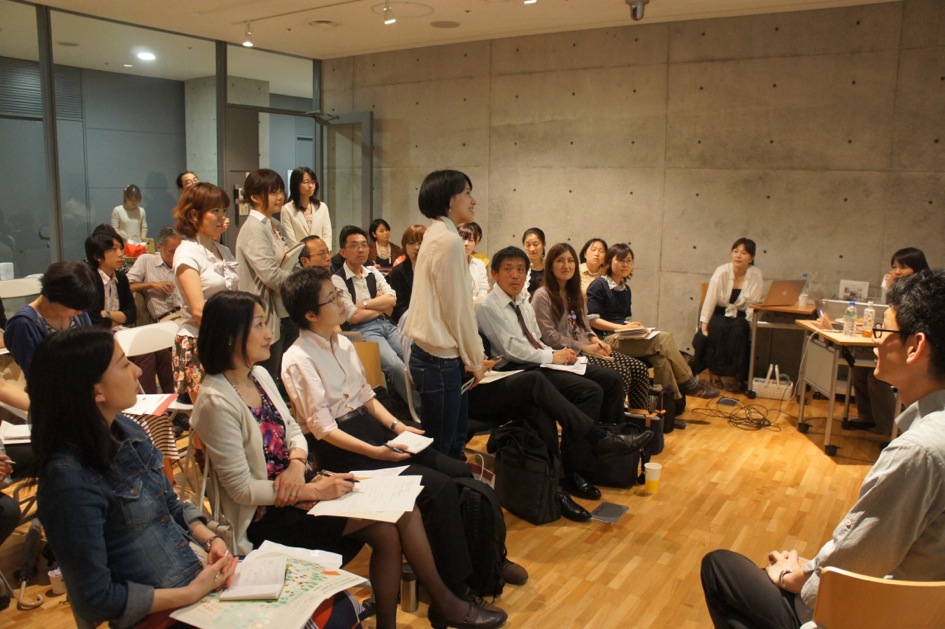 The second half of the event was a time for questions and conversation. We began by discussing the future direction and development of the TOBI Gateway Project after the museum’s impending renovation; we had a heated discussion about the relationship between art and community from various points of view. There was a specific focus of the discussion was on how people envisioned the TOBI Gateway Project reaching its goals, and the answer was the “day after tomorrow potential.” I got to speak up a little during the discussion. The “day after tomorrow potential” is explained as a “vague image of the future,” as cited by the words of Mr. Kiyokazu Washida in the “100 nin-de-kataru-bijutsukan-no-mirai (Discussion on the Future of Museums with 100 People” (Keio University Press, 2011). In comparison, the image of “tomorrow” is a “future that already has determined goals.” In order to achieve the envisioned results of “tomorrow,” you will define the tasks, put them into your calendar, and execute them. It is a method of creating an image of the future calculating backwards from set goals to figure out the steps to achieve them. Perhaps the majority of people live their daily lives using this “tomorrow” image method. (I am usually one of them, too.)

However, the “day after tomorrow” in this context is an image of the future which exists beyond tomorrow, unlike “tomorrow”, which is a nearby future. I have already described above what the “day after tomorrow” image that TOBI is aiming for. But rather than calculating backwards what is necessary to achieve these goals, the TOBI Gateway Projects’ goal of the “day after tomorrow” image is achieved by accumulating the experience that can only be accrued from those various people who come to the museum. At one point, there was a time the TOBIKOs introduced themselves in front of everyone, and each of them shared their thoughts from the point of view on becoming successful art communicators in the future. Having an interested party like the TOBIKOs at the talk allowed the discussion to become more intriguing and deep.

When I think of it, the TOBIKOs include people aged from their teens to their 70s. They included a wide variety of 90 unique members such as: students, company workers, housewives, retirees, researchers, nurses, teachers, reporters, artists, city council ward members, quiz authors, etc. Is there any other platform where people with such diverse backgrounds, generations, and values can interact so equally other than the arts? (Even as I write this, I am impressed at how these people all gathered here together.) The TOBI Gateway Project is a place where a wide variety of people come together, share goals for the project, and even sometimes engage in debates, while always respecting each others’ individuality to create a community with new values. (Ito)